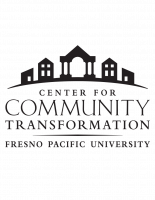 On November 15, 2022, H Spees, a longtime community activist and supporter of the CCT, called with an invitation: He was showing a group from Albania around Fresno and wanted to know if they could drop by to hear about CCT’s work.

Erion Isei, the Mayor of Erseke, Albania, and some of his officials were touring the United States looking for ways to better address social issues in their town of about 3,000 people located in the southern part of the Southeastern European nation just north of Greece on the Adriatic Sea. Among the 11 people making the trip was Petrika Gjata, who—though staff would not know until he arrived—graduated from FPU with a B.S. in management in 2018. He acted as translator.

Spees, who most recently served as director of housing and homelessness initiatives for the City of Fresno, has also been a pastor and head of a leadership development organization. Once everyone was gathered around a table topped with doughnuts and other snacks for the guests in the sunny office, he laid out the dark scene circumstances that led to the creation of CCT and other community actions. “In 1993 we were losing our soul as a city,” he said of Fresno. Poverty, gangs, homicides and car theft led the long list of problems.

After that introduction, Randy White, D. Min., recently retired executive director of the center, described how CCT—which is celebrating its 10th anniversary of promoting the social, economic, physical and spiritual welfare of the San Joaquin Valley—began bringing light to the community through social enterprise, micro-enterprise, a faith-based financial education curriculum and a ministry certificate for pastors of local Spanish-speaking churches. Other efforts engage with human trafficking, homelessness, leadership development and challenges faced by congregations. (More at Home • Center for Community Transformation (cctfresno.org)

Fresno was the last stop for the Albanians on a tour that included New York state, Detroit, Chicago and Sacramento. Now it's home and perhaps a more hopeful future.