At the end of every event, all eyes look to one unblinking measure of success: the scoreboard.

Sometimes the defeated can’t look away—the victors don’t want to. In the smiles and shrugs that follow, people analyze, dissect and discuss, sometimes loudly, strategies, split-second decisions and other what-might-have-beens.

The scoreboard declares victory, but is victory the complete measure of athletics, and athletes? Fresno Pacific University looks beyond the win-loss column to shape student-athletes for full lives.

“The time comes when you’ve played your last game,” says Jeremiah Wood, associate athletics director. “If you have the mentality that sports is all there is, then when athletes are done competing, they’re no good to you anymore. We want to be a place that is preparing student-athletes for success after college, whatever that looks like.”

It’s really important to give back to the community and the school because they’ve done so much for us.
Megan Lee, Women's Basketball 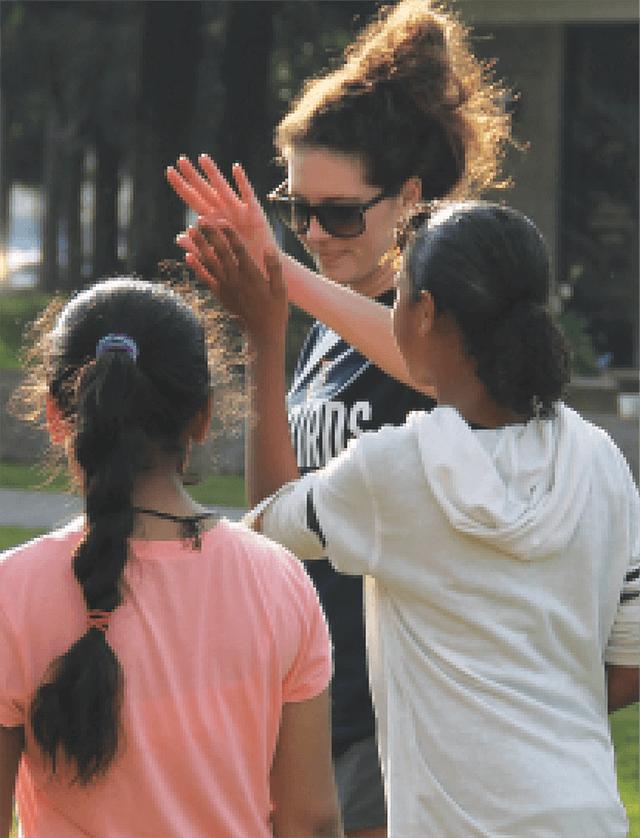 That preparation begins by committing athletics to academic, personal and spiritual development. “We have
a unique ability to use athletics as an avenue to grow young men and women holistically,” Wood says.

Goals, statistics and honors are also a part of this idea of athletics. The department set a mark of 3.0 for an average GPA among student-athletes—that objective was reached in the 2017 spring semester. To make this happen, coaches hold required study hours at home and on the road, coordinate with the Academic Support Center, Faculty Team Representatives and other resources and make sure student-athletes communicate with faculty and others.

In the last four years, Sunbird athletics has also won two service awards each from The Make-A-Wish Foundation and the Pacific West Conference, where teams compete as part of NCAA Division II. “We appreciate the recognition for our commitment,” Wood says.

C.J. Haydock (BA ’10), men’s basketball, is one head coach leading his team to a new level academically, athletically and personally. All three attributes are parts of a complete identity. “A person who will sacrifice for service will sacrifice on the floor,” he says. “The way you do anything is the way you do everything.”

In addition to supervised study hours, Haydock hosts Thoughtful Thursdays, where he or guest speakers address behavior and other topics, and Wednesday Morning Commitment Statements, where student-athletes set specific and actionable goals in personal, athletic and academic areas. They also write thank-you notes to faculty, family and others. “The antidote to entitlement is gratitude,” he says.

Sunbirds served during the 2016-2017 academic year

Student-athletes earned during the 2016-2017 academic year

Unlike the stereotypical view, it is not unusual for student-athletes to be good students, due to their drive and organization. “They know how to manage their time because they have such busy schedules,” Wood says.

Student-athletes agree time is of the essence, but appreciate FPU’s different idea of athletics. “The community, the faith background of the school and the idea I could build closer relations with teachers, coaches and classmates,” caused Sam Burt to transfer. The senior exercise major from Minneapolis plays forward on the men’s basketball team.

“The main challenge is keeping up with your homework on the road,” says Burt who, used to the Minnesota chill, wants to experience the West Coast. “You have to get your academics done first, then you can venture,” he adds.

Trips can be a week when teams play in Hawaii, says Clovis senior Megan Lee, who plays shooting guard on the women’s basketball squad and is working on an M.A. in Kinesiology with an emphasis in physical education. “You have to be organized and communicate with teachers. It’s like another job, with the time we put into it,” she says.

Service assignments range from cleaning the cafeteria to organizing a crab feed fundraiser for Court Appointed Special Advocates for Children (CASA) to working with students in special education at Greenleaf Middle School. There are also long-term relationships such as the one with Make-A-Wish.

Helping others is part of living up to your God-given potential, according to the student-athletes. “It’s really important to give back to the community and the school because they’ve done so much for us,” says Lee.

In the end, FPU athletics is about skills and values for life. “It’s really important to us as a department in a Christian setting that we don’t look like the rest of the world,” Wood says.