Carrying the Big Idea Forward: From Virtual Reality to a Closer Connection to the Central Valley

Imagine students at FPU slipping on goggles and standing before a house where people sought Jesus’ healing touch.

Without leaving their Valley classroom, the students would inspect that house’s archeological remnants in modern-day Israel. In that moment, virtual reality—a technological experience of realistic images, sounds and other sensations—would make the Gospel come alive.

Removing the goggles, students would hear a lecture by a professor in Israel via a hologram projected into the classroom by laser beams and digital processors. “The hologram idea sounds more sci-fi, and it might remind people of ‘Beam me up, Scotty,’” says Ron Herms, Ph.D., dean of the School of Humanities, Religion and Social Sciences. “But virtual reality already exists, and I think the experience for our students is not that far down the road.”

As Herms and other FPU leaders envision the university in its next 75 years, they see both opportunities and challenges in evolving technologies, new academic programs and changing relationships with students, faculty, alumni and donors. FPU will also face dynamic trends in higher education as it continues its commitment to the Fresno Pacific Idea—FPU is a Christian school, a community of learners and prophetic.

New realities in higher education occur at a rapid rate, and one of the biggest is what Karen Cianci, Ph.D., dean of the School of Natural Sciences, calls the “businessification” of colleges and universities. Competition from for-profit schools—with their many part-time faculty—pressure FPU to follow the part-time trend. Cianci and others see a future where full-time faculty decrease in number but do more to oversee adjunct faculty.

The educational community also will experience continual reshaping by never-ending technological revolutions. One of the biggest: the advent of computers with artificial intelligence that can learn and mimic thinking. They will demand FPU students develop sharper critical thinking skills. “Technology changes so quickly now that it comes down to the discernment of information,” Cianci says. “Successful people will have to think on their feet to accommodate these smart computers.” She adds that as technology alters the circumstances and tools of teaching, faculty must value the Idea and reinvent applications for Christian community and a prophetic voice.

The future also will demand quicker responses to these new realities. “Higher education has typically been slow to recognize the need to embrace change. But Dr. Joe [FPU President Joseph Jones] isn’t slow, and he has surrounded himself with people who aren’t either,” says Don Griffith, vice president for advancement, executive director of the FPU Foundation and former chair of the university’s board of trustees. “Yesterday’s methods are not going to work tomorrow.”

Griffith and other university leaders are discussing expanding internships to all undergraduates. About 250 students would participate each year, gaining experience and making valuable contacts in businesses and other organizations. The internships might satisfy potential students and parents looking for a “return on investment,” Griffith says: “They’re asking, ‘What is attending Fresno Pacific going to get me? What opportunities am I going to see?’ It’s not your traditional liberal arts education anymore.”

To offer more internships, FPU seeks new partnerships with local employers. In the process, Griffith hopes community leaders gain a deeper understanding and appreciation for the university. “That engagement leads to affinity, which leads to dollars flowing back in the form of donations,” he says. “One of our keys to thriving in the future is to become deeply embedded with the business and professional communities.” Their financial support will be crucial. “Nationwide, the pool of potential students is shrinking but our costs—like everyone’s—are ever increasing,” Griffith says. 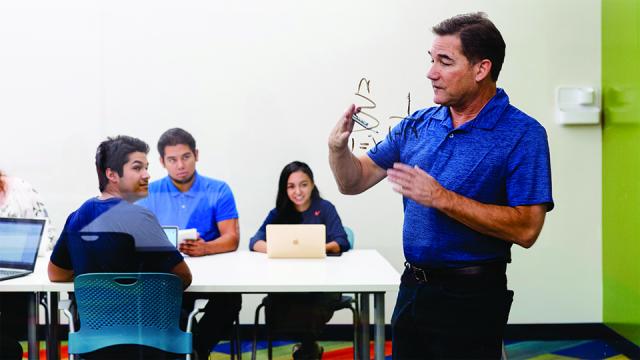 In the future, FPU will expand its community of learners, says Gayle Copeland, Ph.D., provost and senior vice president for academic affairs. Semester- long programs are one option in which students and faculty would study and teach at Christian universities abroad while counterparts from other nations come here. Participants would see their worldview grow while equipping themselves to help transform the San Joaquin Valley, Copeland says: “The change of paradigm and perspective would help our students working in the Valley as global citizens.” The community of learners also could be reshaped by mixing younger traditional undergraduates with older degree completion students in courses. Details of this new practice remain unresolved, but the life experience of older students could benefit younger ones.

Meanwhile, costs in housing, transportation, food and childcare make graduation difficult for many students. In response, FPU is looking at initiatives to address students’ day-to-day needs, says Dale Scully, vice president of student life. For example, grants or donors may help with affordable housing near the main campus, with students contributing a share. “I don’t believe in providing anything for free. People have to have some skin in the game,” Scully says. “But for a long time, colleges catered to the upper middle class and wealthy, and that can’t happen here in the Valley. Higher education has to be open and accessible to all.” Ensuring that is prophetic, Scully adds. “It’s being bold and engaging this Valley on ideas and issues that really matter.”

We talk about seeking shalom and being peacemakers, and we want to be helpful in preparing our students to do that work.
Gary Gramenz, Ph.D.

The future also could see new academic programs addressing the unique needs of the Valley. Katie Fleener, Ph.D., dean of the School of Business, sees a day when students could earn a degree in business administration with an emphasis in either agriculture or sustainability management. FPU doesn’t currently offer either emphasis, but, Fleener says, each is consistent with the Idea. “It’s about community growing out of common commitments, and one of those is seeing the Valley get better.”

Training chaplains is a possibility for Fresno Pacific Biblical Seminary. “They find themselves in places that pastors don’t have access to anymore because people are less and less engaged with the church,” says Valerie Rempel, Ph.D., vice president and dean of the seminary. Chaplains traditionally serve in hospitals and the military, but business is a growing trend. “People still need soul care, and chaplains provide it,” Rempel says.

In the School of Education, leaders want to advance what they already do: train teachers to see education as redemptive service. “We talk about seeking shalom and being peacemakers, and we want to be helpful in preparing our students to do that work,” says Gary Gramenz, Ph.D., dean of the school. Today that work involves teaching children and teenagers with social and emotional problems. So, Gramenz says, student teachers could benefit from instruction by mental health professionals. “We want to determine in the future how people with this expertise can inform us about best practices,” he says. Such instruction would ideally continue through a teacher’s career. “You’d start here and for the next 30 years Fresno Pacific would be a place you’d constantly come back to for professional development,” Gramenz says. 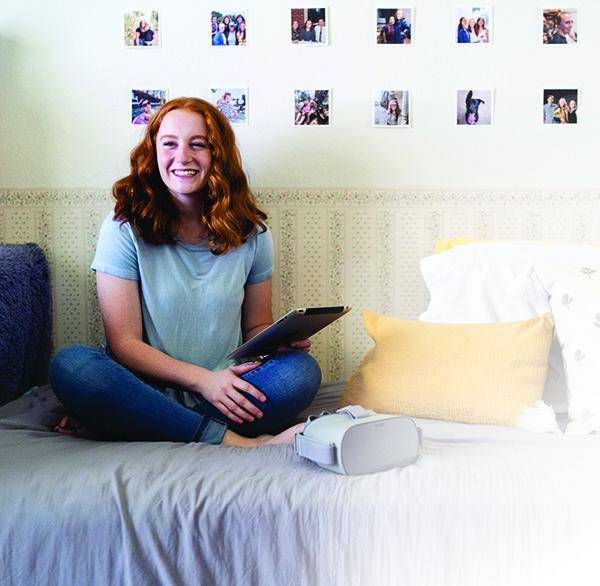 Building closer relationships between FPU graduates in the community and current students could provide another form of professional development. Ali Sena, director of alumni development, wants every student on the main campus to have mentoring by a graduate. “Relationships have always been important at FPU, and this would be a way to build on that,” she says.

Serving the FPU community plus the community beyond the campus is the focus of new facilities for visual and performing arts as well as athletics. The planned Culture and Arts Center on the main campus will host local and national art shows and historical exhibits, choral performances and instrumental recitals, films, theatrical shows and more. Future expansion could include studios and labs for two- and three-dimensional art, ceramics and graphic design instruction plus rehearsal spaces. Programs and events will entertain, educate and encourage visitors to “consider new ways of conceptualizing their faith,” says Chris Janzen, MFA, assistant professor of art, design and creative innovation. It also will serve as a prophetic witness and bring a message of hope, adds Walter Saul, D.M.A., professor of music. “By having a beautiful and wonderfully resonant performance hall in an area of Fresno often overlooked by the city and region, we are engaging the prevailing culture.”

The athletic department’s focus is a new baseball stadium, concession stand and restrooms at Steinert Athletic Complex, where the Sunbirds also compete in soccer, tennis and track and field. “The core of what we’re trying to accomplish in building facilities centers around the Fresno Pacific Idea,” says Director of Athletics Aaron Henderson. “Yes, we want to win and be competitive, but the opportunities we have with our facilities to build community and be a good host are just as important.”

As with all building projects, more brick and mortar is not the goal. “We want our students to know we value them as people,” Henderson says.

Finally, FPU is exploring new technologies to improve communication with prospective students, says Jillian Freeman, associate vice president for marketing and communications. One example: the university is building a communications system that would allow it to tap social media, identify high school students who’ve shown an interest in an area of study and send them personalized emails that would tell about that major at FPU and introduce the students to their future faculty. “We want to invite them into our community of learners so they can experience the Fresno Pacific Idea,” Freeman says. “But to do so, we have to stay relevant in how we tell them what we have to offer in a world changing so rapidly.”