The Fresno of 1946 disappeared in the distance as the car from the Pacific Bible Institute rumbled north. One passenger still remembers the journey.

Elvina Willems was one-third of the singing “ladies trio” at PBI, which would become Pacific College in 1960 and Fresno Pacific University in 1997. The trio made the road trip with others from PBI to visit Mennonite churches in Oregon, Washington and British Columbia. Their goal: spread the word about the school, which had opened in 1944.

Willems – who was Elvina Epp then – is one of five living members of the charter class. The others are Joanne Becker Frantz of San Luis Obispo, Ruth Huebert Braun of Canada and Anna Fast Enns and Bob Willems, both of Reedley. Elvina Willems, who’s 95 and lives in Reedley, doesn’t remember some details about PBI, but she’s clear on how she came to enroll in 1944. Her pastor, George B. Huebert of the Reedley Mennonite Brethren Church, paid her way. “I wanted to go, and my parents couldn’t afford to do it,” Willems says. She lived in a dormitory, where room and board for a semester was about $200. 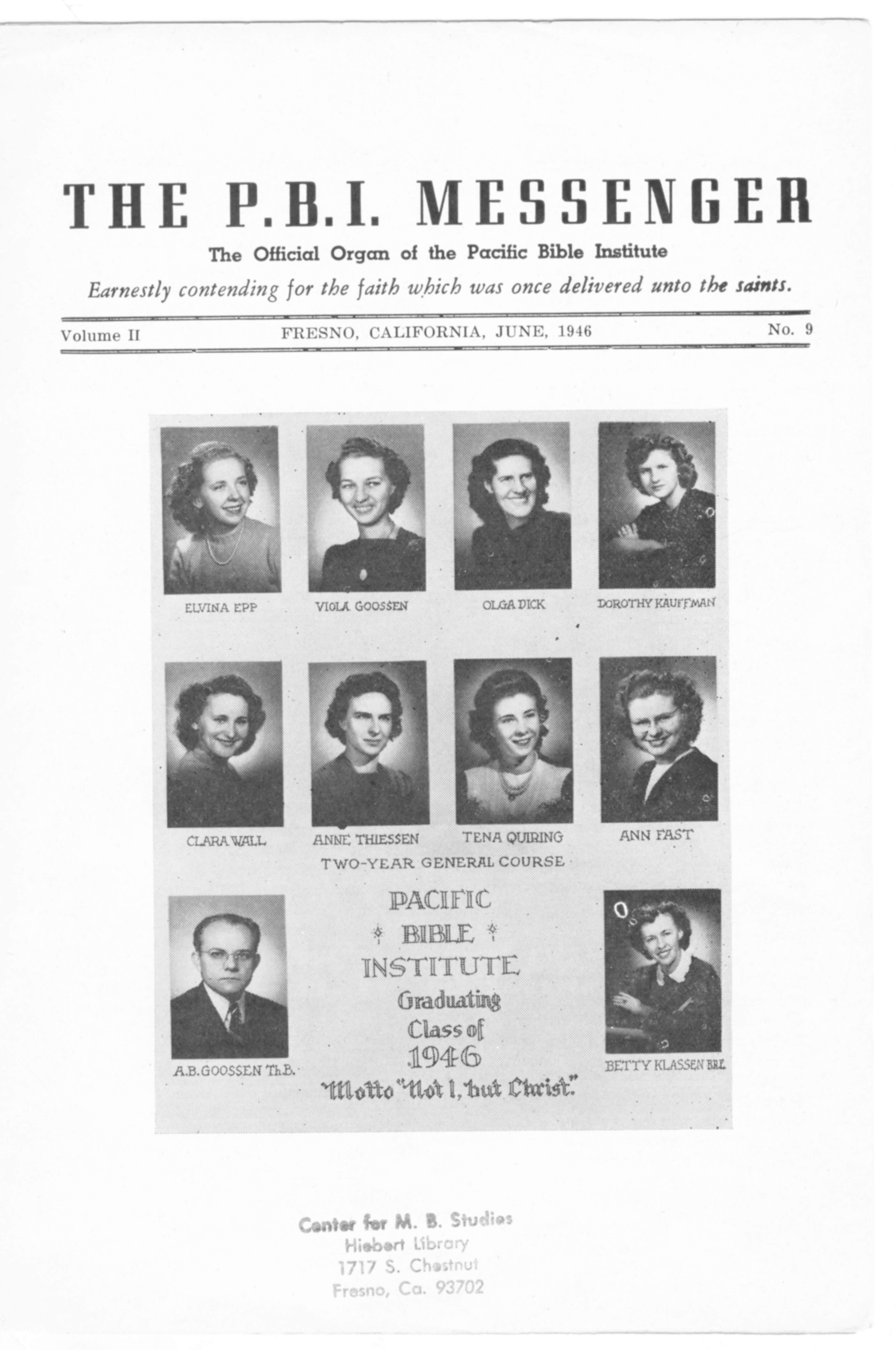 The Pacific District Conference of Mennonite Brethren Churches opened PBI near downtown Fresno on September 18, 1944, with brief remarks, a prayer and one stanza of “What A Friend We Have In Jesus.” Willems, a soprano, would have willingly added her voice to the hymn – she’d started singing as a little girl. “When I was 3, my mother took me on stage at church, and I sang a solo,” she recalls.

Twenty of the first 28 students were women, and many had part-time jobs. Willems worked behind the candy counter at the Kress 5-10-
25 Cent Store, and later at another sweet spot: Wilson’s Confectionary. She chuckles when reminded of those jobs: “Well, in your early days, you do all kinds of dumb stuff,” she says.

The music program – led by Professor Otto Richert – was her favorite part of PBI, and she had several opportunities to sing on special occasions. There was the 1946 road trip to the Pacific Northwest churches, which offered “cordial receptions” to the visitors from Fresno, according to the school paper. And that same spring, Willems performed a solo when PBI’s Oratorio Society presented the sacred “Hymn of Praise” at her home church in Reedley. Of that performance, the paper reported, “It is the hope of the society that someone may have been blessed.”

Then on June 6, 1946, Willems was the only student soloist at PBI’s first commencement. She was one of eight women graduating from the two- year general course; her class had chosen as its motto: “Not I, but Christ.”

A place in FPU’s history

Willems returned to Reedley after graduation to get married. She’d met Harry Willems at church when she was 17 and fell in love. “He’s a special person,” she says. He built her a house before their wedding, and when they returned from their honeymoon, they had only a mattress to sleep on. Some memories, it seems, never fade. The Willems have five children: James and Paul, both of Kingsburg; Randy of Napa; and Connie Koop and Sandra Reimer, both of Bakersfield. The Willems also have nine grandchildren and 15 great-grandchildren. Harry Willems is 100.

Willems smiles when reminded she made history as one of the first students and first graduates in the history of FPU, but confesses: “I haven’t thought much about that. I had a family to raise. But Fresno Pacific was a good, interesting part of my life.”