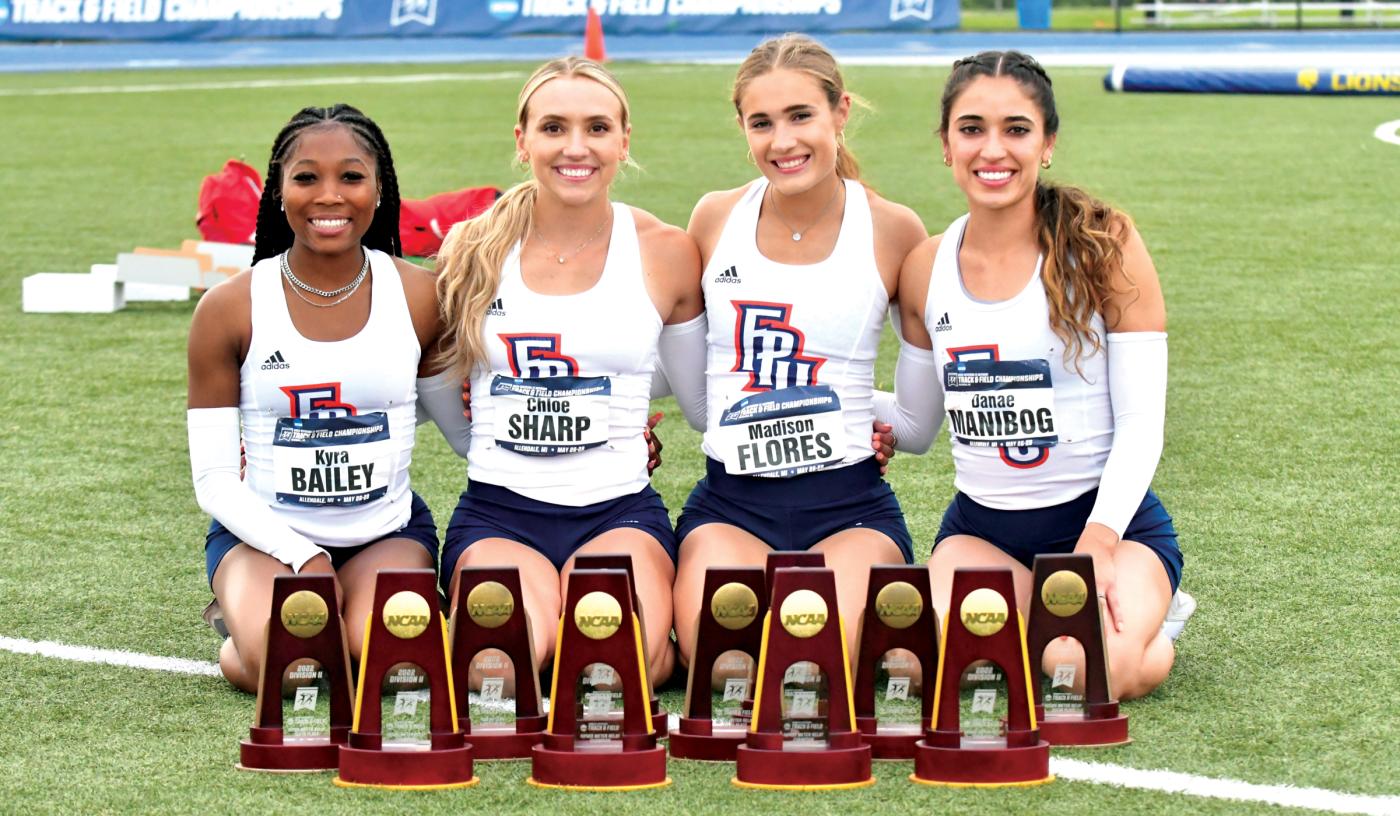 For Kyra Bailey, Madison Flores, Danae Manibog-Gatewood and Chloe Sharp, Proverbs 27:1 (“As iron sharpens iron, so one person sharpens another”) became the rallying cry that led to an NCAA DII national title in the 4x400-meter relay.

Several in this Valley group had competed with or against one another since high school. When they came together at FPU, Flores says, they knew they had something special.

The 2019 4x400 squad—Flores, Manibog- Gatewood and Sharp, along with Brie Courseault (BA ’20)—broke a school record at the national championship, helping the women’s track and field team place sixth. The team looked forward to building on that momentum in 2020, but that season was cut short by COVID-19. Then 2020-21 saw only modified competition.

As the 2021-22 season began, team captain Manibog-Gatewood encouraged her teammates with mental health resources and bonding activities, including Bible studies. “We talked about ‘iron sharpens iron,’ and what that looks like in a team atmosphere,” she says. “Coming back into an actual season, we were a lot more balanced and athletically mature.”

The result, she says, was a highly focused team going for gold at the National Championship meet in Allendale, MI.

Known as the 4x4, the race is four legs—or laps—around the 400-meter track. Closing the meet and featuring top runners, the 4x4 is a highlight of track meets from elementary school to the Olympics.

“Even elite athletes understand the 400 is intimidating,” says Kyla Richardson, who competed as anchor runner all season until she was sidelined with an injury just prior to nationals. “The 400 is a full sprint all the way around the track.”

Flores, as first runner, sets the tone for the race. “You want to put [your teammate] in a good position coming off the turn,” she says. “Going into nationals I knew the teams that were going to be putting pressure on us, and I knew I had to be right next to them or a few steps ahead if we were going to take the lead going into the second leg.”

Flores handed the baton to Manibog- Gatewood, who handed off to Sharp. “My goal was to get my anchor into first place,” says Sharp. “There’s not a lot of time to think or process.” Sharp was in first place when she handed off to anchor Kyra Bailey.

“Every time one person went around, it was another push of motivation,”

A win in the bag

When Bailey began her run, the team knew victory was theirs. “I knew Kyra, I’d raced with her since high school,” says Manibog-Gatewood. “When I saw her hit that 50-meter mark, I knew we were going to win that national title.”

Bailey crossed the finish line with another new school record and the Sunbird women placed 10th overall. “To look up at the time and the split that I ran, to learn that we broke our school record, we were all speechless,” she says.

Bailey, Flores and Manibog-Gatewood set personal bests—a feat Flores attributes to “iron sharpening iron.” “That was what we reminded each other of, on the really hard days or when some of us were tired,” she says.

Manibog-Gatewood adds, “What makes it so special is you’re not only running for yourself. When you’re smoking down the stretch and running neck and neck with the next person and you think you can’t give anymore, you somehow find it within yourself. For once your view isn’t ‘What am I going to get when I cross the finish line?’ Your view is your teammate, who is holding their hand out, asking for the baton.”

IN STEP WITH SUNBIRDS