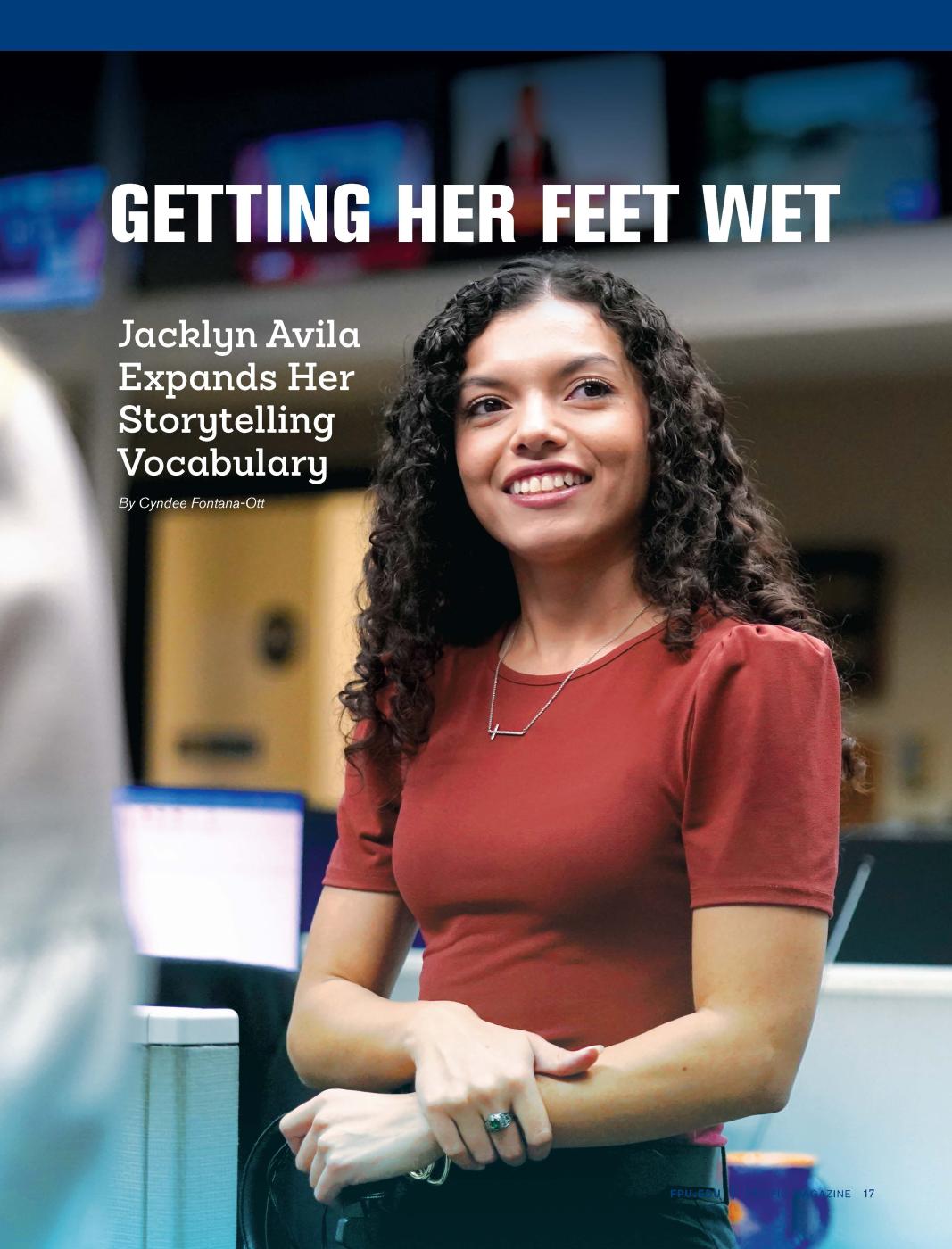 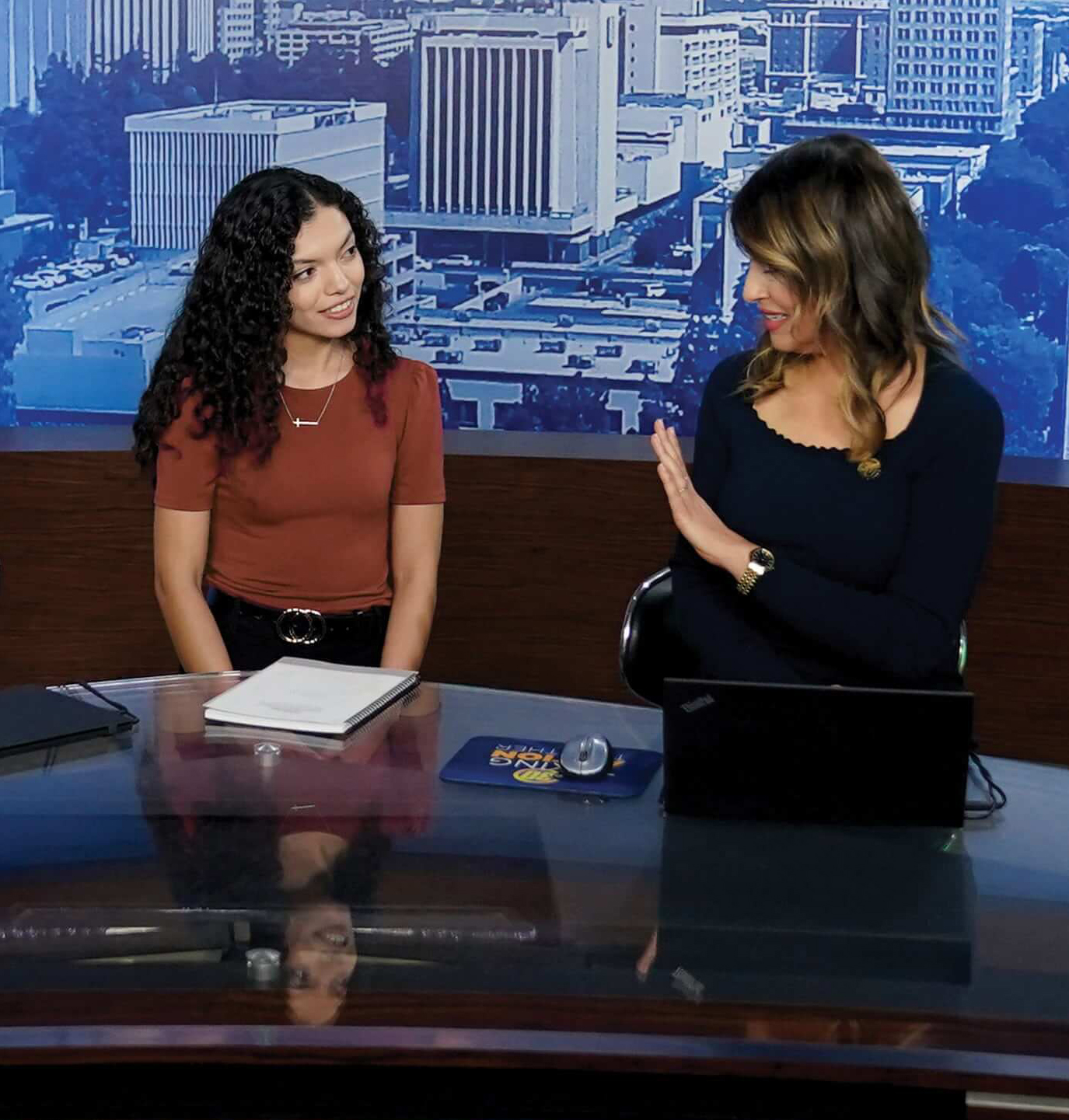 Jacklyn Avila’s first camera was small, pink and sparkly— a Christmas gift for a little girl growing up in Reedley.

The palm-sized toy lacked a screen to show images, but that didn’t matter. Avila (BA ’22) spent the holiday snapping away at everyone and everything before uploading images to her parents’ computer.

That Disney camera sparked a love for photography and storytelling. Avila fed both flames through the years by taking pictures of nature and soaking up every class related to film or photography at Fresno Pacific University.

As Avila, 22, approached college graduation, she dreamed of a behind-the-scenes career in film. But she also needed an internship to complete her bachelor’s degree—and she earned that opportunity and more at ABC30/KFSN-TV.

Today, Avila is a full-time news producer at the Fresno television station. While it might not be her ultimate dream job, she is excited to follow a path revealed only by the practical college requirement of an internship.

“Before the internship, I had no knowledge or experience in news,” says Avila. “Then, just a few months into my internship, I realized how much I enjoyed scriptwriting and I looked forward to every day that I worked with producers…I wanted to spend all of my days and hours working with producers and writing stories.”

Avila now produces several weekend morning newscasts—choosing stories, writing scripts, organizing the show and more. She also works a few weekdays and is absorbing the business like a thirsty sponge.

In reality, Avila wasn’t the typical candidate for the station’s internship program. Many college interns arrive with some ambition to be in front of the camera along with an academic grounding in television news.

Avila didn’t. That didn’t bother Moreno, who chose her from candidates recommended by Disney, the station’s parent company that offers a company-wide professional internship program and handles much of the search process along with initial applications and interviews.

Moreno took over as internship coordinator just before the pandemic hit; her first few interns worked via Zoom. Avila was the first to come back into the station, and Moreno was determined to provide a full experience for her and others that followed.

I want them to learn about how to get their first job.
Graciela Moreno

The news business wasn’t on Avila’s radar in college, where she majored in communication with an emphasis in media and film along with a minor in English. Throughout high school in Reedley, Avila cultivated a love of photography—selling a few nature prints at the city’s first Art Hop—and hoped that could become her career.

She chose FPU even though the university didn’t offer the perfect academic path. After public high school, Avila yearned for a campus that incorporated faith into daily life. “It felt like the small Christian community and Christian education that I had been longing for and that I really needed in my life at that point,” she says. 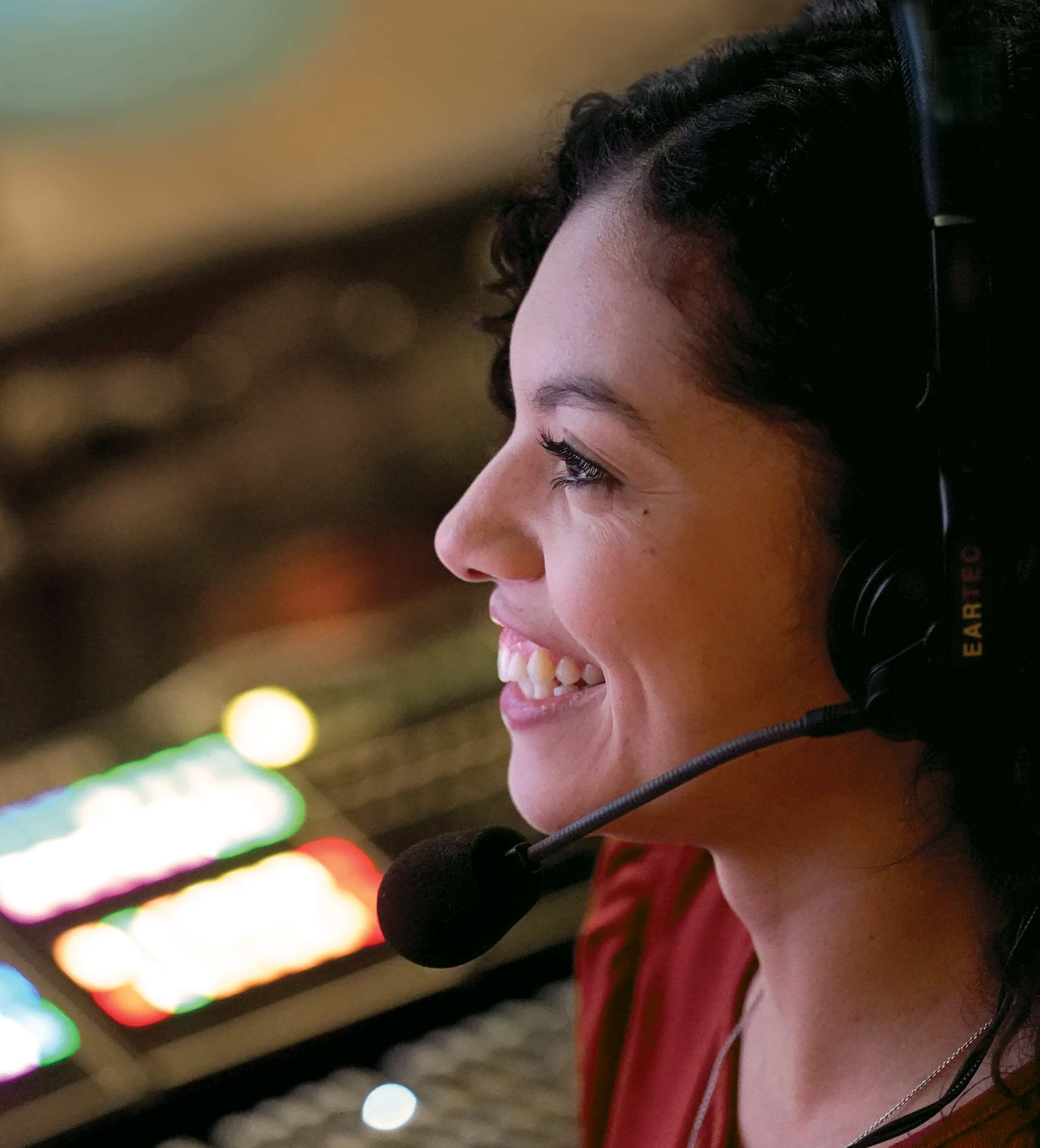 She soon found a campus job as the student photographer for athletics—a position she held all four years of college. Avila also took every class related to filmmaking, cameras or video production.

In the summer of 2021, as graduation approached, she began hunting for an internship close to those interests. She discovered the ABC30 program.

“I didn’t know if news was something I wanted to do as a career,” Avila says, “but I thought what better way to learn and get my feet wet?”

Surprised but also overjoyed to be chosen for the internship, Avila quickly realized she had a lot to learn. “I’d never been in the newsroom and essentially had no prior concept or experience in the news, writing for the news or even speaking in front of a camera,” Avila says. “It was definitely intimidating.”

The biggest challenge—in addition to overcoming a natural shyness and ditching her college t-shirt-and-jeans wardrobe—was learning the roles, responsibilities and technical skills associated with each position. Moreno made sure that she spent time with reporters, producers, engineers and employees in other departments such as marketing and promotions.

“I know Jackie wasn’t sure about what she wanted to do when she first came in,” Moreno says. Having a diversity of experience helped Avila learn what she did enjoy (producing) and what she didn’t (reporting), while also building up a resume suitable for many different jobs at a TV station.

Those were valuable lessons. “I knew that even if she chose to work behind the scenes that she still gained such great confidence and knowledge by going out with the reporters and understanding their job,” Moreno says. “I think that’s going to make her a better producer.”

I thought what better way to learn and get my feet wet?
Jacklyn Avila

As the internship progressed, and was extended by several months, Avila struggled to balance those demands with her college classes and campus jobs. She ultimately gave up a second campus photography job, and dialed back the sports photography work because she was spread too thin.

“It definitely started feeling like a lot and I had to prioritize,” Avila says.

She also began thinking about the next step after college. Avila was passionate about producing and began prepping to apply for an open position at the station.

“I started to look at ways that news could be a stepping stone to get to what my dream was as a career,” Avila says. “Rather than dropping my prior plan and dream, and just going for news, I could use it as a learning experience and another part of the path that could help me get to where I wanted to be.”

Shortly before graduation, she landed the job. Moreno was happy for her and pleased with her growth during the internship.

“The kind of confidence that you see, the kind of change you see in a young person—it’s just amazing, and it happened with Jackie,” she says.

Avila calls Moreno a mentor, teacher and friend who helped her break out of her shell and find a footing in the business through an invaluable internship experience.

“Just trying to jump into a career out of college without internship experience,” Avila says, “would have been a huge struggle.”

For information on internships, check out the Career Development Center at fpu.edu/careercenter