Today, when I look at his handwriting, it’s a huge encouragement to me.
— Gary Barber (BA ’82) 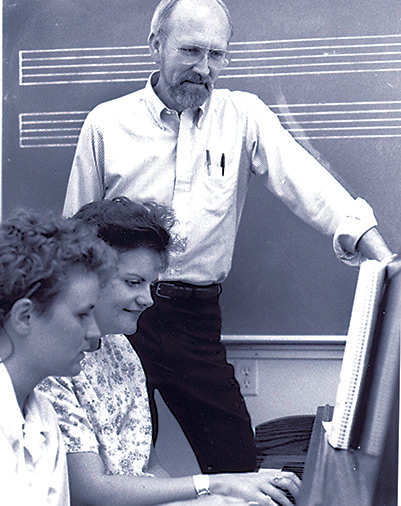 UNRUH, WIEBE AND WARKENTIN EXEMPLIFIED THE INFLUENCE OF A CARING FACULTY

The sheet music from Larry Warkentin came in the mail to the house in San Francisco. Gary Barber (BA ’82) opened the envelope with anticipation because — as he says today — “Larry was my friend and mentor for life.”

Warkentin sent the sheet music — an original Christmas carol he composed — several months before his death earlier this year. He hoped to encourage Barber to resume playing the piano following a long break due to a professional setback. Warkentin, D.M.A., emeritus music faculty at Fresno Pacific University, was a man of deep faith committed to students for a lifetime. “Larry exemplified his Anabaptist beliefs through his daily life,” Barber says. “He taught me you could show the world what you believe, not necessarily by what you say, but by your actions.” The sheet music came with Warkentin’s original notations. “Today, when I look at his handwriting, it’s a huge encouragement to me,” Barber says. “I may be 61, but I should keep pressing on and learning.”

And yes, he started playing the piano again.

Warkentin died in April 2021, and Karen (Crockett, BA ‘02) Madden also remembers his mentoring with appreciation. “Through the years whenever I saw him, I could count on Dr. Warkentin to have the right word at the right time. He was clear, wise and aptly spoken on any subject we were discussing,” She says. “He always gave you his full attention in conversation.” Humility added to his credibility, as did a skill in offering criticism positively. “As a performance major, I trusted his advice, which was always musically sound, and appreciated that his instruction was always given in a kind way,” she says. Madden teaches piano privately and is inspired by Warkentin’s far—reaching influence. “You always hope to encourage and inspire your students like he did—for a lifetime.”

You have to treasure the moment someone comes to you and wants to talk. Billie Jean taught me that.”
— Joy Rubio (BA ’17) 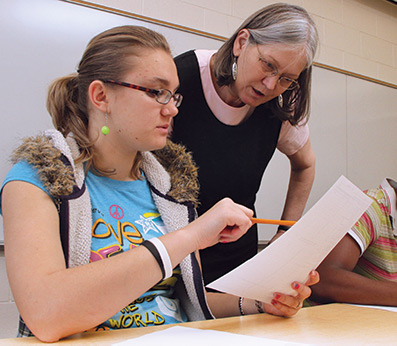 Rachel Cooper (BA ’17, TC ’20) found courage and comfort in Wiebe’s office but not always immediate answers. “I often would leave Billie Jean’s office with more questions than I had going in,” Cooper says. “She wouldn’t tell you what to do. She asked questions and allowed you to come to her conclusions. I think Billie Jean already knew what was important to me even if I didn’t quite have a handle on that yet.” Most significantly, Cooper shared the trauma of being sexually assaulted during her junior year, and Wiebe let Cooper’s pain pour out, encouraging her to write about it. “I don’t think I would have processed anything if it weren’t for Billie Jean and the safe emotional space she provided.”

When Cooper was disappointed by a church leader’s response to the assault, she and Wiebe talked about sexism in some Christian settings. “That helped me understand how everything that happened to me influenced my relationships in the church and with God.” Through it all, Wiebe helped Cooper realize the importance of every person’s full story – including hers. Now an elementary teacher, she seeks out books that reflect her students’ realities and encourages them to begin writing their stories.

Joy Rubio (BA ’17) says Wiebe excelled as a mentor because she knew the right time to speak and did not minimize difficulties. “As I started to share my story, some really intricate pieces of my life, she just listened and listened without interjecting anything. That was new to me. Once she felt I was ready to receive feedback — to receive her voice — she offered it.” On one occasion, Rubio shared a problem and then downplayed the trouble before Wiebe could respond. “Billie Jean just gave me a little chuckle and smile that said to me, ‘Joy, it doesn’t sound like it’s going to be fine. In fact,
it sounds really bad.’ She was ready to take on whatever story students brought with them.”

Rubio, a former admissions counselor at FPU and now a high school guidance counselor, strives to emulate her mentor. “You have to treasure the moment someone comes to you and wants to talk. Billie Jean taught me that.”

Ken Martens Friesen (BA ’84), Ph.D., professor
of history and international studies, experienced Unruh’s mentoring as a student and later a colleague. “Simply by taking a class from Richard you felt mentored in a sense,” Friesen says. “He always pushed us to think in a very comprehensive way. We never knew what his perspective was, but he was constantly questioning ours and presenting an eloquent counter-argument.” Unruh helped Friesen broaden his worldview to see poverty and social justice as critical issues of faith, which contributed to Friesen’s decision to teach in Africa after graduation. Later, he earned graduate degrees and joined the faculty in 2002.

“Richard had decades of experience over me but treated me as an equal.” As chair of the social science department, Unruh gave Friesen freedom to develop new courses and allowed him to take over Unruh’s favorite foreign policy course. Then, for almost seven years, Unruh set aside time from his busy and disciplined schedule for a weekly lunch with Friesen. It was a time of professional and personal fellowship, and it left a lasting impression. “I want to make room for conversations and time with colleagues to develop personal relationships,” Friesen says. He also attempts to follow Unruh’s practice of making himself available to students. “I try to have an open-door policy that encourages them to talk about their concerns, whether it’s about a class assignment or larger questions about life.”

Richard was the most influential part of my college career. The things I learned from him helped determine the direction of my life.”
— Lisa Freeman (BA ‘03)

Lisa Freeman (BA ’03) sat in Unruh’s world politics course on September 11, 2001, as the nation was plunged into shock. “Richard helped us begin to process what it was to be a global citizen in the midst of this terrible terrorist attack. It was a critical moment to think about how the United States interacts with the world.” As Freeman’s faculty advisor, Unruh encouraged her to go to New York City three weeks after 9/11 to attend a Mennonite Central Committee conference on pacifism. Freeman went with uncertainties about pacifism, but the conference brought clarity. “I realized it is not just not fighting, but working hard to achieve peace and the resolution of conflict.” Freeman says this new-found perspective helped lead her to the U.S. Office of Transition Initiatives, which runs programs to help countries experiencing political instability. She’s worked at the agency for the last decade, often traveling overseas.

Freeman says Unruh was her first professional mentor. Before meeting him, she was used to youth group leaders who relied on fun-loving, sometimes silly camaraderie to reach mentees. “Richard was more reserved and serious, and he showed me what’s important is being genuine,” she says. Freeman tries to do the same as she partners with people around the world, always remembering Unruh’s example. “Richard was the most influential part of my college career. The things I learned from him helped determine the direction of my life.”