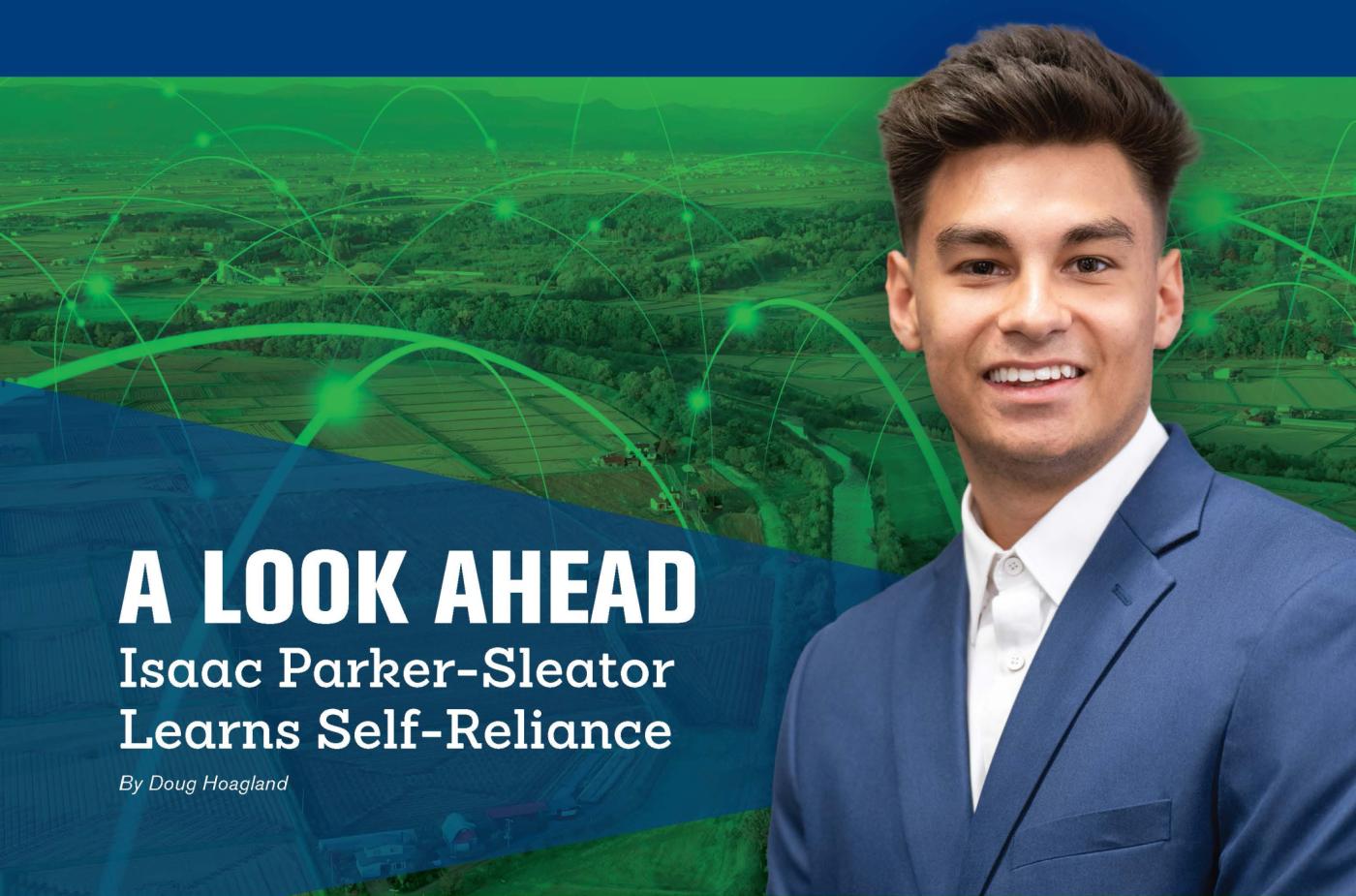 The iPhone alarm sounded at 5:15 a.m., but Isaac Parker-Sleator (BA ’22) gave himself a few extra minutes in bed.

Planning ahead, after all, has its rewards. The night before, he’d laid out the chinos and longsleeved dress shirt he’d wear to his internship at Johanson Transportation Service (JTS). He’d also made a bowl of breakfast oats that now only needed a microwave.

It was a really good taste of what was ahead for me.
Isaac Parker-Sleator

Outside, dawn pushed aside the darkness on a summer morning in Fresno. Parker-Sleator would soon begin another day in a fast-paced, high-stakes business he’d known nothing about weeks before. “The job helped me realize that this kind of work environment was going to be my life after graduation,” he says. “It was a really good taste of what was ahead for me.” Internships prepare students for life after college, offering a bridge from the jobs of youth to the career demands and opportunities of adulthood. Students get a taste of workplace cultures, relationships with colleagues and expectations from bosses. Since 2020, business majors like Parker-Sleator have been required to complete an internship. At JTS, he worked as a broker intern, making deals with small and medium-sized trucking companies to move fruits and vegetables for commercial customers across the United States. Cherries from California to New Jersey. Vegetables from California to the Pacific Northwest. These and other loads were arranged and monitored from the Fresno office.

The 22-year old Parker- Sleator learned the importance of multitasking in today’s business world, and he gained experience in trusting his judgment to make sound, independent decisions. “No matter where my career leads me, I will apply those important lessons in the future,” he says.

What mattered was stepping into the professional working environment.
Isaac Parker-Sleator

Arriving at FPU in the summer of 2018 to play soccer for the Sunbirds and study marketing (later adding management), Parker-Sleator grew up in Woodside, a Bay Area community between San Jose and San Francisco. One parent works for Google in Silicon Valley, and his family values a strong work ethic. In high school, Parker- Sleator stocked shelves in a grocery store, later coaching summer soccer. Those jobs gave him money for clothes, entertainment and soccer equipment. He started playing soccer at age 4 (“my older brothers played so I wanted to”) and became a standout in high school.

More help came from head soccer coach Jaime Ramirez. Through two friends who work at JTS, Ramirez learned about the internship and helped connect Parker-Sleator to the job. It didn’t matter to Parker-Sleator that he knew nothing about transportation or that his ultimate career goal was in sports management. “What mattered was stepping into the professional working environment,” he says, “and getting more comfortable talking to random people I’d never met.”

On a typical day at JTS, Parker-Sleator worked on two computers, shifting concentration continually between different flows of information demanding quick responses. For eight hours a day, he:

The goal was to sell multiple loads by lunchtime, which underscored the need for results. “If I made those sales, it would give me drive for the rest of the day, and if I didn’t, I’d have a cloud hanging over my head,” Parker-Sleator says.

The good news: his supervisors were helpful and reassuring. Alicia Bly, vice president of corporate operations and legal affairs, provided solid training before having interns take on more responsibility. Shawn Dhillon, carrier procurement lead, always offered encouragement. “Regardless of how the day was going, Shawn reassured me that my work was good, and I should keep at it. That helped pick me up.” Parker-Sleator could turn to Dhillon for help, but he worked to resolve issues on his own. “The most important thing I learned about the world of work is how self-reliant you need to be.”

Johanson has had a relationship with FPU for decades. The late Richard Johanson, company founder, believed in local educators and institutions. Parker-Sleator and other FPU interns have been “stellar employees,” Bly says: “Each has come to us with respect and a foundation of knowledge that has accelerated their job performance.”

In the summer of 2021, Parker-Sleator gained valuable experience while helping JTS provide an essential service during the employee shortage caused by COVID-19. The company not only paid Parker-Sleator and other interns, but wanted them to understand this about the corporate world: “There are still great companies to work for that offer respect and gratitude for employees,” Bly says. She adds: “If we can provide work experience to help our youth find and begin their careers, our community benefits.”

During the internship, Rose Winn, director of career development at FPU, also supported Parker- Sleator. “She was continually checking in with me to make sure the internship was a good fit and to see how the experience could relate to a future work environment,” he says. Winn—lead instructor for the School of Business internship program— says FPU is committed to ensuring that students gain a “professionally relevant experience.” She adds: “I maintain communication throughout their internship to help them learn as much as possible from their job, and to support them in whatever way I can.”

The experience pushed me to be more responsible…
Isaac Parker-Sleator

On to the future

After working at JTS from 6:00 a.m. to 3:00 p.m. (with an hour for lunch), Parker-Sleator spent three afternoons a week coaching soccer and took three summer courses. Time management became a new and valuable discipline. Johanson offered him a job at the end of the internship, but he opted instead to focus on his academics and his senior soccer season. After graduating last May, Parker- Sleator returned to the Bay Area. He works part time in marketing for the San Jose Earthquakes soccer team and part time for a Menlo Park youth center that offers creative arts, athletic fitness and nature awareness. Parker-Sleator has also started work on a master’s degree in sports management at the University of San Francisco.

He may never again broker a truck delivery of cherries or strawberries, but he’s grateful for the opportunity to work and learn during the internship. “Compared to other jobs I’ve had, there was more of a professional feel to the environment as well as an understanding that the work was very important. The experience pushed me to be more responsible and plan out my days. I have taken that with me.”