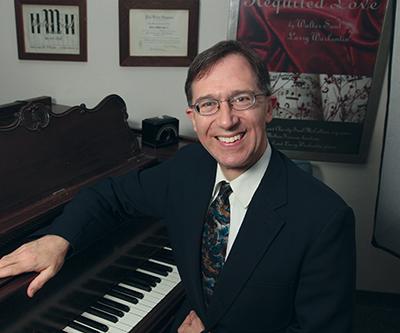 Walter Saul found his place when then- President Merrill Ewert called Fresno Pacific University an engaged Christian university of high commitment to Christ and high community engagement. “I wanted to be a part of that community right away,” Saul says.

In the spring of 2020, Saul, D.M.A., music emertius, completed 17 years as a professor of music, teaching music theory, appreciation, piano and his first love—composition. He also doubled his list of published works to 300 and added to his award shelf, which holds 24 ASCAP prizes and numerous composer of the year honors.

Music came early to Saul. The Philadelphia native grew up in Chevy Chase, MD, building on the musical foundation his mother provided from age 2, and starting to write music after joining a boys choir at All Saints Episcopal Church at 7. Piano lessons followed at 9 and theory and composition study at 11.

So did success. At 13, Saul wrote a Communion Service that attracted a full-page article—“A Boy of Note”—in the Washington Evening Star. Two Broadcast Music, Inc., Student Composer Awards followed. As a Duke University undergraduate he won three Henry Schuman Music Prizes, and published his first music while earning his master’s and doctorate at Eastman School of Music.

Saul joined FPU in 2003 from Warner Pacific University. Larry Warkentin, D.M.A., professor emeritus of music, was Saul’s entrée through their membership in the Christian Fellowship of Art Music Composers. “FPU truly loves its students, and I have treasured being part of that ethos,” Saul says.

In turn, Saul felt valued as he started the Summer Music Camp and the Pacific Artist Series. Colleagues and students requested compositions, and his work was performed at Carnegie Hall, by the Fresno Philharmonic and recorded on Naxos. He also wrote music for three FPU presidents. “This has truly been the Lord’s call on my life,” he says.

For all his achievements, Saul seeks no honors. “My mission as a composer is to create musical icons, windows of sonic light, that usher listeners into the presence of Jesus Christ,” he says. More at waltersaul.com/index.php/about-2/about.