Sharing A Path of Healing

In that instant, the pain of Warren’s personal life collided with the pain of a person who needed her help. Warren’s 26-year-old son, Brett, had taken his life in 2014, and now for the first time she needed to assess whether a client intended to die by suicide. Warren had known this moment would come during her internship in the Fresno Pacific University Marriage and Family Therapy (MFT) program. But that knowledge didn’t make it easier to handle.

“My training truly did kick in,” she says. Thoughts about her son would come later. “In that moment, all I felt was concern and compassion for this person. I felt their pain, but I didn’t allow it to cloud my judgment. I felt very calm as I went into the assessment.”

Internships present FPU students like Warren with opportunities to gain valuable experience in their fields of study. But challenges exist. Internships can require students to juggle other jobs, schoolwork and family obligations. It’s difficult to imagine a bigger challenge than Warren’s as she sat at a plastic table in a windowless room on that winter afternoon. Did the person on the phone have an actual suicide plan or did they simply need a mental and physical break from their stressors? From her education at FPU, Warren knew to directly broach the subject of suicide.

The more they talked, the less agitated the client sounded. Emotion drained from the voice; words lost their bite. Warren’s assessment: the person wasn’t planning to end their life that day. Nevertheless, she helped the client develop a safety plan: a list of emergency numbers and self-help steps if the stress flared again that night. After the call, Warren sat alone. As her adrenaline crashed, her body began to shake. “It hit me what just happened—the severity of what it could have been and the importance of the work.” The memory of her son also came into focus. “I couldn’t help but think: ‘Where was the me in his life when he needed it most?’”

But she didn’t linger with those thoughts. Instead, Warren called her supervisor for a debrief. The supervisor said to call the client back in an hour for a check-in, and Warren found a calmer and more stable person. She ended the night with a sense of satisfaction—and relief. “My training and professionalism—along with empathy—had served me well. I could see someone through a really hard time. It wasn’t the last time I’ve had to work with someone struggling with suicidal thoughts, though none was as hard as that first time.” 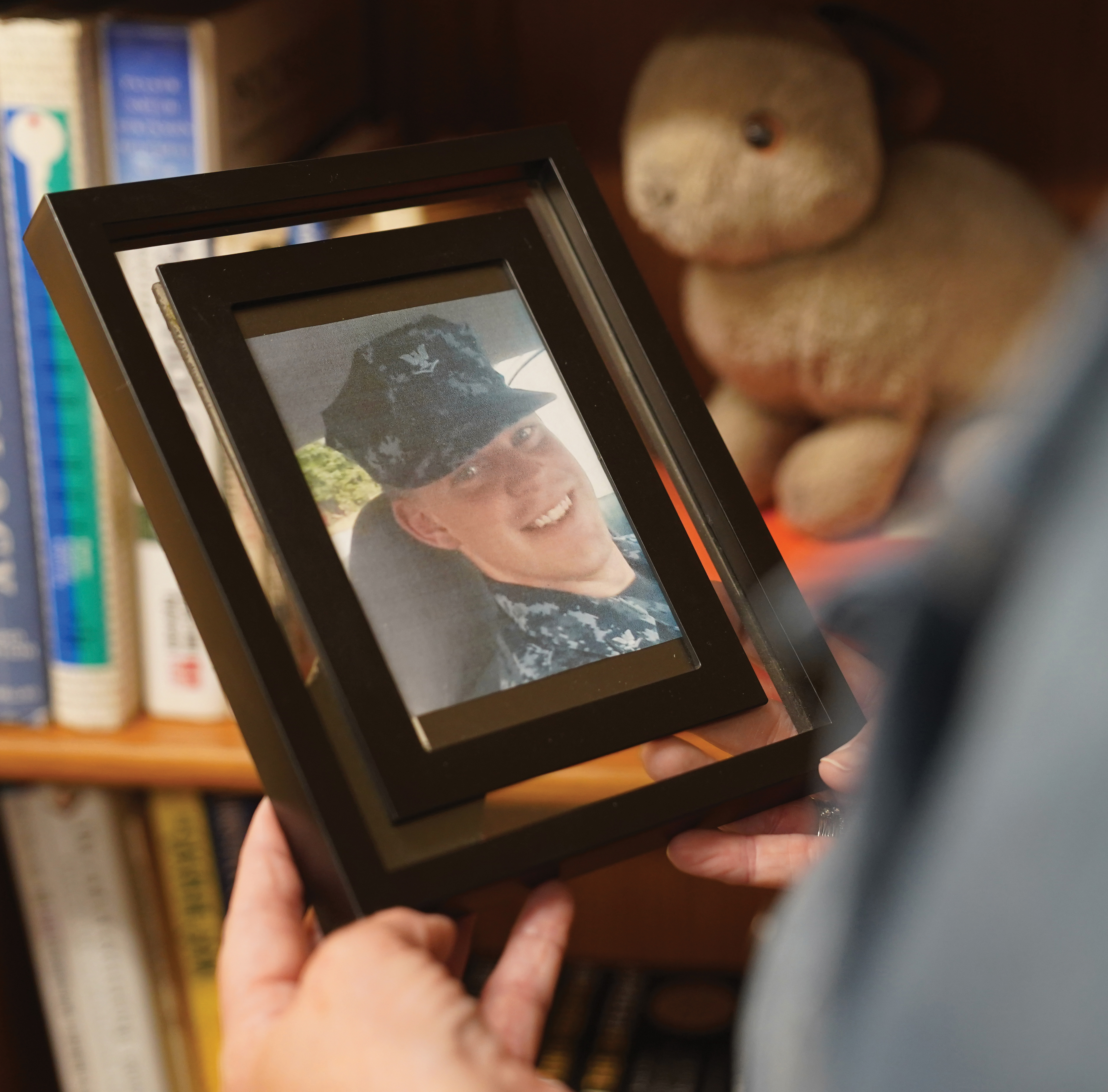 Warren’s journey to becoming a therapist began decades ago. From a young age, she found that people seemed comfortable talking to her. At 14 she heard about customers’ lives while taking orders at a roadside diner. Later as an adult, she listened to people over coffee. “I’ve always looked beyond someone’s words,” Warren says.

Then came her son’s death. “I was surviving. Barely surviving.” Warren sought out a Christian counselor, and, she says: “Slowly, slowly, I began to put the pieces back together. I felt like I owed it to Brett to do something with all of his pain.” She went back to college, first earning a Bachelor of Arts in Social Welfare through FPU’s degree completion program. Then she entered the M.A. in Marriage and Family Therapy program at the Fresno Pacific Biblical Seminary. At first, Warren wanted to concentrate on grief counseling, but eventually realized that grief—even if not verbalized—is a part of all counseling. “Everyone who comes into your office is dealing with the pain of some kind of loss,” she says.

Warren learned that truth again and again during her internships at the On-Site Counseling Program, where she worked with children at a school, and at Kings View Behavioral Health, where she worked with adults at a clinic. Such internships are vital to students studying to become therapists. “They need clinical experience to put their book learning into practical, real-life experience working with people,” says Angela Turner, M.A., director of On-Site Counseling. The program serves the FPU community as well as the public. State law allows students to see clients because licensed therapists at their internships must supervise the students’ work and review their clinical decisions, Turner says. “The learning curve for becoming a therapist is pretty steep, and Shellie met the challenge and stepped into her own as a therapist.”

At Kings View, Lisa Zepeda, M.S., LMFT, says Warren was “hard working, organized, diligent” and exercised “sound clinical decision-making.” Other marriage and family therapy students from FPU have interned at Kings View, and they come well-prepared to address a person’s mental health with the whole-person approach to wellness, Zepeda says.

There is always hope.
Shellie Warren

In the MFT program, Warren found the care, concern and community she needed. “I knew going into the program that I would confront suicide,” she says. “But I had no idea it would be part of almost every class.” The reason: suicidal thoughts are more common than people realize, and therapists must be prepared to deal with them. But knowing that class discussions could trigger memories of her son, Warren would explain to FPU faculty why she might have to excuse herself for short breaks. “They gave me the grace and space to get through that. I can’t imagine that happening at any other school,” she says. “It was a ministry to me—and it taught me how to minister to others.”

Warren also found support from fellow students doing their own internships. “We were all going through these very powerful and sometimes difficult situations with clients,” she says. Once a week, the interns would come together in a class to share experiences. “That allowed us to know we weren’t alone—that someone else had the same experience with a client and questioned themselves in the same way afterwards. It helped us become the unbiased listeners that all clients deserve.”

At home, Warren also found support from her husband, Tom, pastor of the First Christian Church in Hanford. His was the sole income during her three years in the MFT program, and he offered constant encouragement. “He was a true partner in every sense of the word,” she says.

Warren, 62, completed her master’s last May and was named an FPU Outstanding Graduate. In August she began working for On-Site Counseling at FPU’s Visalia Campus. Much had happened for her. Internships. Graduation. A job to help others. Each a step further away from despair. “There is always hope,” she says. “I wasn’t feeling much of that after Brett died. But God put me on a path of healing, not only for myself but for helping others. God used Fresno Pacific to transform the hardest and darkest time of my life into a beautiful and hopeful future.”