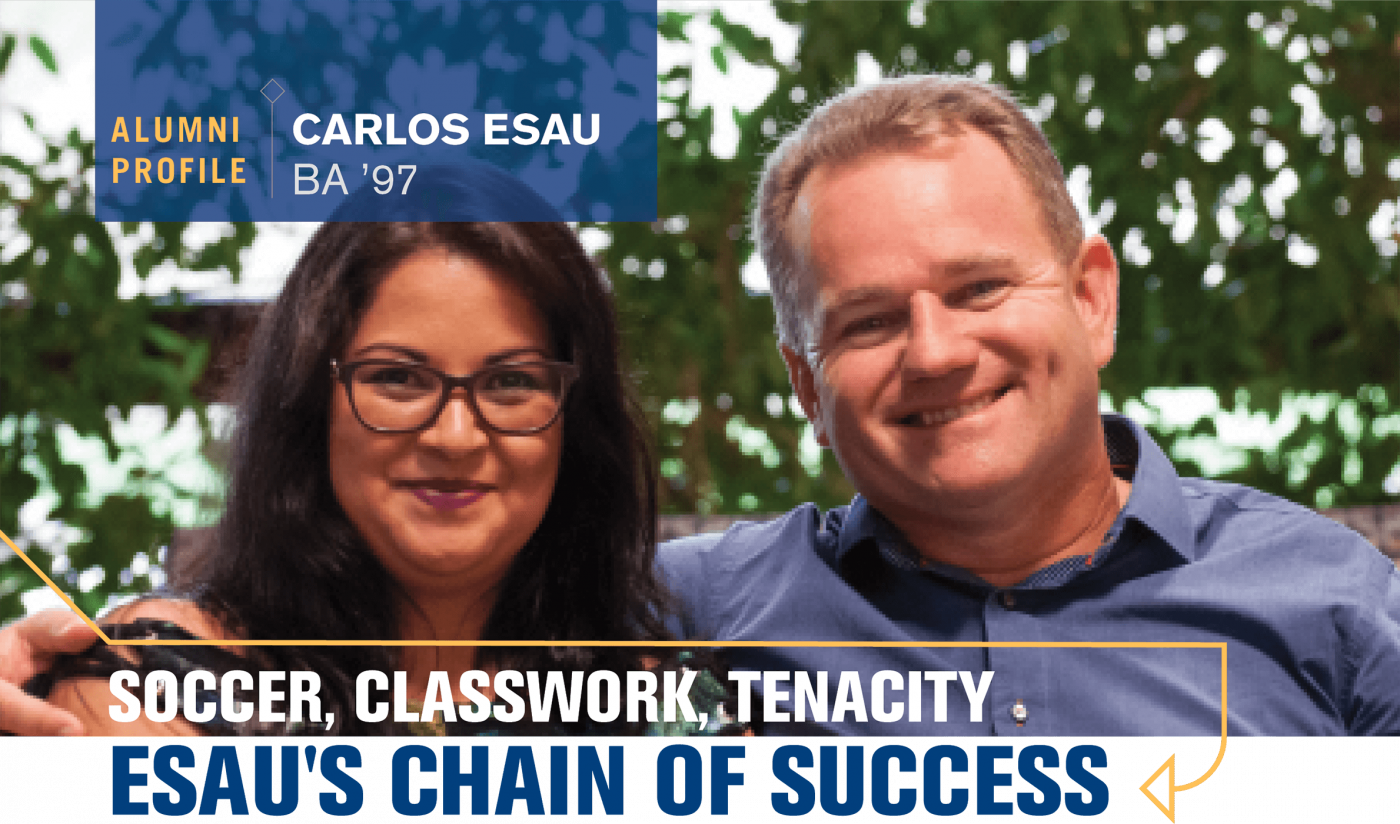 A determination to succeed, a passion for the Bible and a willingness to work led one alumnus to piece together a chain of success to his own human development company.

Carlos Esau (BA ’97) agrees he wasn’t the best player on the soccer team. But 20 years later, his coach recalls his drive. “Carlos was as committed a player as I have had,” says Jaime Ramirez, FPU head coach. “Once he was on the team, he gave of himself. What he lacked in ability he made up in work ethic.”

Raised in the German Mennonite Brethren colony of Colonia Nova in the southernmost region of Brazil, Esau grew up active in church, but not driven. “I was born into a Christian family and it was always in the mix. Perhaps I wasn’t as mature,” he says.

Having played soccer in Brazil, Esau linked quickly with Ramirez. He got “a little bit of scholarship,” then another scholarship, then help from his parents, then jobs for the summer and school year, persistently piecing what he needed. Summers were spent working full-time for facilities management, cleaning buildings and cutting grass. At one time or another, there was also work in construction, an auto shop and helping with soccer camps and kids’ activities at Butler and Northwest churches in Fresno. “I would do whatever,” he says.

After a rough beginning learning English and adjusting to his new life and place, Esau found a home in the business department studying marketing and management. His education led him from just jobs to a position as a marketing manager back in Brazil, where today he lives in Santa Cruz do Sul with his wife, Rejane, and two sons.

Success for Esau still meant uniting his skills in leadership with his desire to develop people through Christian principles under his own banner. This led him to form Get Human Development in 2006, which he took full-time 10 years later. Esau coaches, trains and consults adults, using practice and theory to establish new professional attitudes. “The whole point of opening my business was to help people achieve their goals,” he says.

Esau is also on the faculty of Haggai Institute, an international Christian leadership organization, where he earned a master’s degree in regional development. The institute focuses on places where Christianity is not the majority religion, according to Esau, and his affiliation is linked directly to his education at FPU. “It’s only because I came to Fresno Pacific,” he says.

In all, Esau estimates he has affected 10,000-15,000 people. And whatever they come for—consulting, personal development or leadership training—they get more. “I put God’s principles in there somehow. I share the Gospel in some way,” he says.

Soccer and travel are still part of Esau’s life. The family has been to Paris, Buenos Aires and Singapore. August 2017 brought Carlos and Rejane to FPU for his first visit since graduating. Re-connections included a special friend: the electric cart that was his campus work vehicle.

What Esau received from FPU was well worth the labor—in and out of class. “It was four awesome years. I grew as a young boy, as a Christian and in my skills,” he says. “My heart is very thankful. God, keep on blessing Fresno Pacific.”