Wallflower to Center Stage: Bettis Helped Students Like Him Transform from Shy to Shining 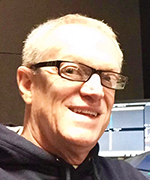 As his 40-year career teaching theater reaches its final curtain, C. Alan Bettis (TC ’90, BA ’81) still remembers “The Tragedy” that started it all.

So nervous speaking in front of people he passed out delivering a speech in a required public speaking class, Bettis salvaged his grade with a part in a play. Six minutes onstage was enough to begin conquering his fears. Later starring as Snoopy in You’re a Good Man, Charlie Brown, he laughs he was the first person to legally dance at FPU.

Though Bettis started as a social work major, his new love of the stage led him to add communication with a theater emphasis. He earned a master’s in counseling from Liberty University, then his teaching credential at FPU.

Bettis taught theater at Merced High School, his alma mater, from 1993-2001, until being selected to lead the theater program at Buhach Colony High School, Atwater. He stayed until his
2021 retirement.

Studying social work and theater perfectly prepared him to teach, Bettis says, as they go hand-in-hand with helping people. FPU also showed him Christianity is more than rules; it’s an attitude of compassion and care. As a result, his classroom was open during break and lunch periods, with food in a refrigerator for students without lunch, and he was a listening ear for struggling students and parents.

All his students were his “kids,” Bettis says. “Standing in the audience during a show and seeing them succeed; watching them go from being squirrely freshmen to confident seniors—these are the moments I will miss.”

Looking to his next act, Bettis will mentor his Buhach Colony replacement, a former student. He’ll also continue teaching creative drama for the FPU degree completion program in Merced, and looks forward to watching shows from the audience instead of behind the curtain.