With a smile that lights up a classroom and an energy that engages students, Carlanda Williams (TC ’14) exemplifies Fresno Pacific University’s credo that teaching is a calling to redemptive service. Statewide recognition has come to Williams this Year. “It’s exciting, but I know God is doing all of this,” she says.

A teacher in Fresno Unified School District, Williams uses Whole Brain Teaching as well as other approaches. One student excitedly nicknamed her “The Magical Teacher.”

In Whole Brain Teaching, Williams communicates words and concepts with chants, inflections, gestures and movements. Students mirror her actions and reinforce the information to classmates. “In today’s society—with students using so much technology and their attention spans being so short—you have to keep them moving and talking,” she says. 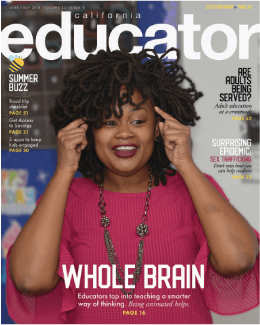 Whole Brain was developed by California educators Chris Biffle, Chris Rekstad and Andrea Schindler in 1999. Williams first learned about it at a conference in 2014, and began using it at Williams Elementary School in 2016-17. She continued at Greenberg Elementary School in 2017-18. Williams—who stepped into a special assignment this fall in Fresno Unified—received the district’s Excellence in Education award for elementary teachers in 2017-18. She’s collected other recognition, as well, including the cover story in the June/July 2018 edition of California Educator.

Fresno Pacific prepared her well, Williams says: “It’s known as the best credential program in the Valley. The professors cared about me as a person, not just as a student.” Williams’ faculty mentor was Lisa Keith, Psy.D., associate professor of education. “I could go to Lisa and all my professors, and they would listen,” Williams says.

At Greenberg, Williams decorated her classroom to look like Disneyland—complete with a banner depicting the Magic Kingdom’s castle. In addition, strands of white lights hung from the ceiling, and the room’s walls were blue with sparkles. Williams also organized a Thanksgiving luncheon for students featuring tablecloths, some traditional fixings and jazz music. “I did it because not everyone gets to experience a Thanksgiving feast like this,” she says.

Students enjoyed a variety of instructional activities: a Jeopardy game, a science fair and a project in which they researched, wrote about and dressed like historical figures. At the end, the students stood like wax museum figures and were videoed in their costumes. Williams posted the video to Facebook, and it has received more than 200,000 views.

It's know as the best credential program in the Valley. The professors cared about me as a person, not just as a student.
Carlanda Williams

After the Greenberg student gave Williams the nickname, Williams created a Facebook page as “The Magical Teacher.”  Each letter in MAGIC represents an important element in her approach: Motivation, Academic accountability, Goal driven, Inquisitive thinking and Content engagement.

“The Magical Teacher is about spreading magic in adults so they can spread magic in their students,” Williams says. “I think it’s important that students and teachers feel empowered, and spreading magic in professional development will do this.” This November she is to be the keynote speaker and receive honors for her work as The Magical Teacher at the National Celebrity Educators Awards.

While her approach to teaching is fun, Williams expects her students to think critically and to ask and answer high-level questions: “I have high expectations. If you set that bar high, students will rise to it. I’m very magical, but they know I don’t play around,” she says.

In her new assignment, Williams splits her time between helping a small group of new teachers and providing professional development throughout the district. “I’m just a vessel and [God] is using me to shine his light,” she says. “I’m really excited about that.”

See the programs that help FPU grads change lives and communities as leaders and entrepreneurs at fpu.edu/business