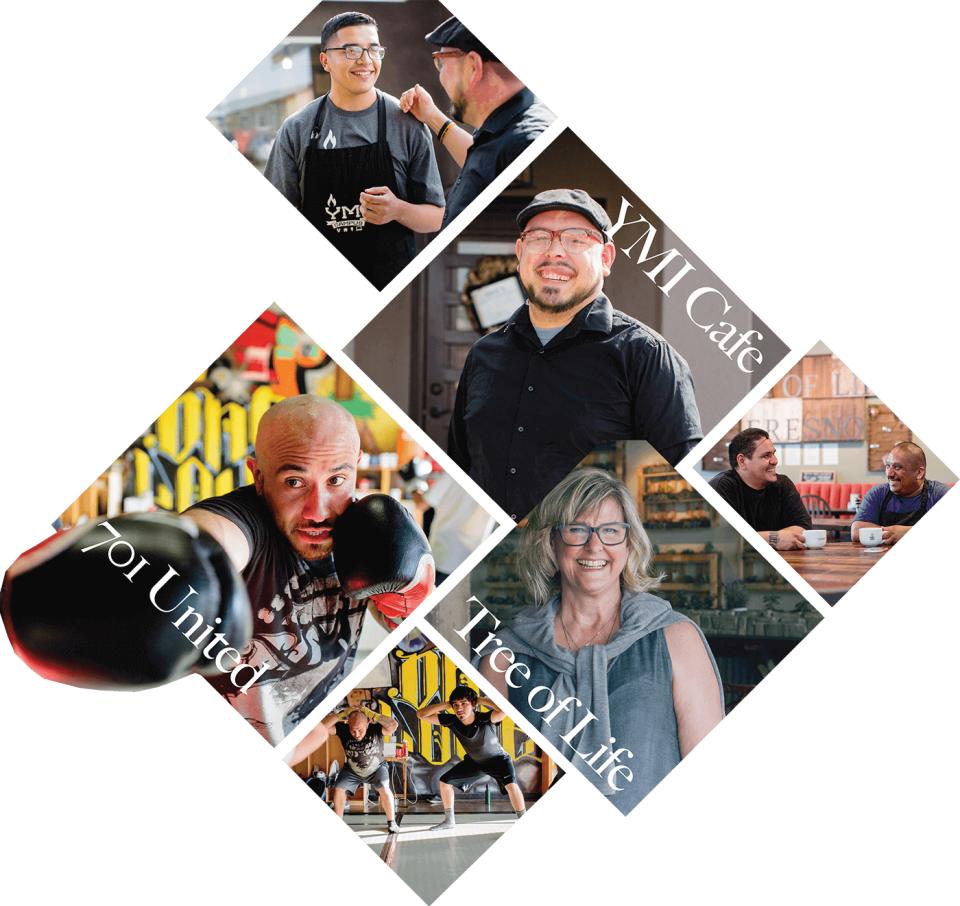 They are that—and more.

Tree of Life Café & Bakery, YMI and 701 United are three of the 32 social enterprise start-ups that have been boosted by the Center for Community Transformation’s (CCT) Spark Tank program. Now in its fifth year, Spark Tank has distributed about $60,000 donated by a combination of foundations, individuals and Wells Fargo.

While the Shark Tank TV show offers business entrepreneurs a chance to pitch ideas to investors in hopes of adding to their financial bottom line, the Spark Tank encourages social entrepreneurs—usually churches and other nonprofits—to offer products and services that serve a triple bottom line of financial sustainability, social impact and environmental stewardship.

By its nature, social enterprise is local, using community assets to solve problems in innovative ways. “You don’t want to just import solutions; you want to focus on what you have,” says Randy White, D.Min., executive director of CCT, part of the Fresno Pacific Biblical Seminary. CCT hosts annual “Pitch Fests,” first on the main Fresno Pacific University campus and now at Bitwise Industries, a downtown Fresno tech hub. Judges are local leaders and university faculty.

Social enterprises provide choices for those who need help and those who want to help them. If someone just out of prison comes to a pastor for help, traditionally all that pastor can do is write letters of recommendation or refer him or her to other agencies. “Social enterprise says we have another option: we can start a business to employ these people,” White says. 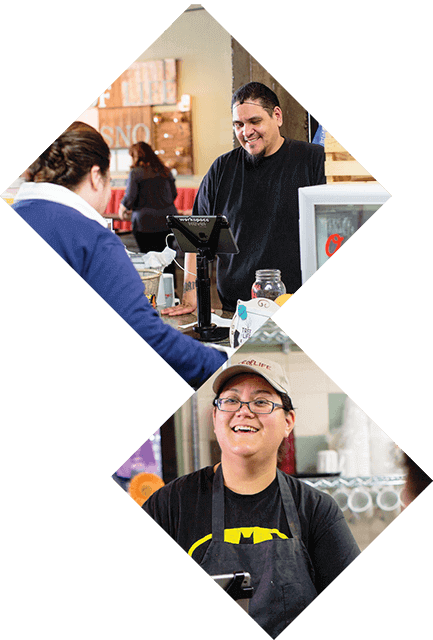 Tree of Life Café and Bakery

Tree of Life Café and Bakery, 2139 Kern St., Fresno, takes downtown trendy seriously. Tabletops are cut planks and none of the variety of chairs, including swiveling antique tractor seats, are from a restaurant equipment catalog.

Carolyn and Steve Ocheltree run the operation. She’s the executive chef and “Mama O” to nine employees, seven of whom have gone through the Fresno Rescue Mission. He’s a CPA in private practice. The Tree of Life grew from the Ocheltrees’ mission involvement, though the seed germinated slowly before the grand opening in March 2016. “Probably for the last 20 years we wanted to have a business in Fresno to employ people who have gone through drug and alcohol rehabilitation and want to stay clean, but need a job and support,” Carolyn Ocheltree says.

That support includes equal helpings of love, respect and accountability. “We hold them to high standards but understand there are areas of their lives they’re still getting in what I call kingdom order—with the lordship of Jesus and law enforcement,” she says.

People come out of rehab wanting to do right, but carrying baggage such as probation officers, court dates, issues with Child Protective Services and health problems from years of bad habits. “These things can affect your employment,” Ocheltree says.

Often there is nowhere to go but back to the places where they got into trouble in the first place. Those who do get a job may be the only employee with a record,

and will be the first suspect when something goes missing.

Tree of Life gives workers skills and interesting work in a place they want to be. “So when old dark habits come knocking they can say, ‘I’m busy’,” Carolyn says.

One of Mama O’s “kids” is 27-year-old Mauricio. He came to Tree of life after 18 months at Fresno Rescue Mission. Life before that? “Oh, trouble,” he says. Dealing drugs and driving under the influence brought him to police attention; the judge decided to chance him in the program rather than prison.

Mauricio is proud of his developing kitchen abilities, but is still willing to bus tables. “Anything they need,” he says. He is also spending time with his young daughter, studying for his GED and planning to attend barber college. What helps him? Support from his family, Mama O—“I don’t see her like my boss, I see her like my friend,” he says, and his fellow workers—“They’re happy people, they’re getting on with their lives.” 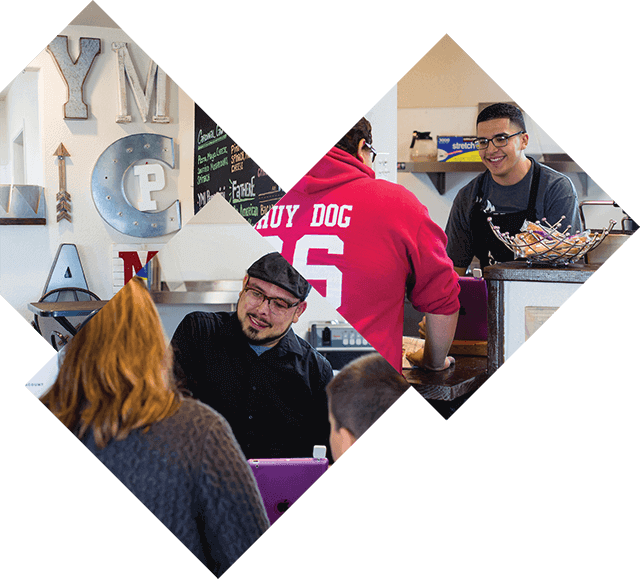 The writing is on the wall at YMI, 12737 Avenue 417, Orosi—even in the bathroom. Signs ask “What’s Stopping You?,” exhort “Have Courage” and promise “You are Worth It All.”

The renovated former home behind Orosi High School (OHS) has sanded wooden floors, repainted walls and new couches, chairs and lamps for a place to study, meet and learn in the back. The café in the front features black wire mesh tables and chairs inside and outside where the lunch and after-school lines of students in caps and t-shirts and the adults in shirts and ties enjoy paninis and drinks.

Eddie Valero started YMI, “Young Men’s Initiative” in 2013 and opened the café in July 2016. Valero is a native of Orosi, a Tulare County community of about 8,770 people. The 2010 U.S. Census put the diverse population at around 87 percent Hispanic, 9 percent Asian and 8 percent Filipino.

The organization promotes leadership. “Our mission is to develop the next generation of successful young men in California,” Valero says, “making sure Orosi is better today and even better tomorrow.”

The young men are a mix of high school students, all from homes lacking a father figure. “We have the valedictorian, we have the gangster, we have the emo and we have the jock,” he says.

While these groups don’t hang out at school, they seek deep conversations that tackle tough issues, Valero says. “This place allows that.”

More than 50 young men have come through YMI, and current attendance is 15-20. Members enter through recommendations from teachers, administrators and YMI participants after passing an interview. Staff includes an OHS counselor, a church praise and worship team leader and a community liaison with the Tulare County Office of Education.

One thing men do is give back, according to Valero. Service projects include serving food to veterans, giving pumpkins to kids and painting house numbers on curbs. “We’ve done numerous things for the community,” he says.

Valero’s life proves hometown boys can succeed. He finished OHS a year early while taking classes at College of the Sequoias, summer courses at Yale University and a summer institute at UCLA and earned bachelor’s and master’s degrees at Cornell University. He has taught at FPU regional campuses and is president of the Cutler-Orosi Joint Unified School District Board.

Jose is one of the YMI alumni working in the café while planning his own success. “I was looking to do community service. I went to one of the meetings and I really liked it,” he says.

The 2016 OHS graduate takes the bus to California State University, Fresno where he is a fulltime student. YMI showed Jose he’s not alone in his struggles. “You know you’re not the only one and you can get through,” he says. 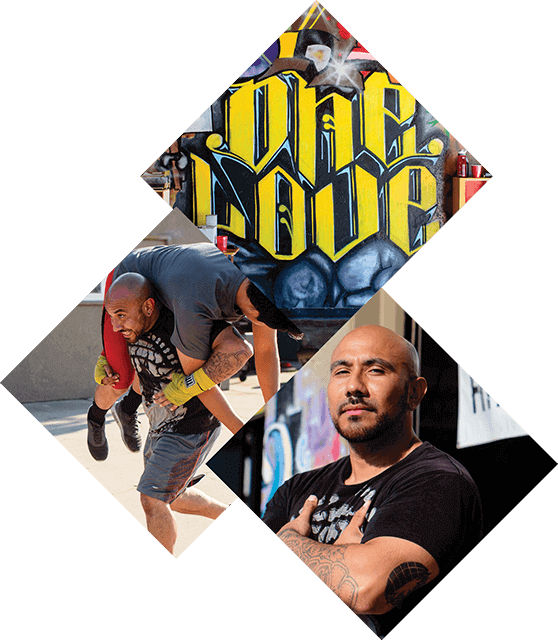 Fresno/Madera Youth For Christ (YFC), 1401 Divisadero St., Fresno, blends into the neighborhood. Past the offices and hallways and across the threshold of 701 United is a different world. Heavy bags and lockers full of workout equipment edge a concrete floor covered with mats. A graffiti mural proclaims “Relationships” and “One Love” across one wall.

A fitness center/mixed-martial arts ministry, 701 United merged with YFC in November 2016 to reach teenagers in Fresno’s 93701 ZIP Code. As the poorest part of the city with the nation’s second-highest level of concentrated poverty, GB3 is unlikely to build. The story connects finding Jesus, improving lives and full-contact grappling and striking.

Not so long ago—the summer of 2012—on a street not far away—McKenzie Avenue—Ivan Paz was punching a bag in his carport. Passing teenagers asked if they could join him. The former gang member (BA ’09, Sem ’15) saw a teachable moment. “The vision was born,” says Jesse Paz, Ivan’s brother and 701 United’s program director and sole full-time employee.

Ronnie was about 13 that first day and living one more 93701 tale: broken home (father deported), mom struggling to raise kids, gangs and drugs everywhere. But Ronnie stuck around to become a 701 United volunteer and part-time staff. Today he’s interned in a bank, will graduate high school with honors and has been accepted to United States Marine Corps recruit training.

“Ronnie had all this dark stuff going on and we’ve helped him overcome that,” Jesse says. “That’s what we do.”

Jesse knows the dark stuff. He wasn’t hitting the bag at his brother’s that summer because he was in prison. By the time Jesse got out in 2015, he had accepted Christ and

was ready when Ivan picked him up and invited him to 701 United. “I was excited,’” he recalls. Jesse trained with kids that day and hasn’t left. “701 United gives me an opportunity to give back to the community I once ran amuck in,” he says.

701 United lights the darkness with physical fitness, Christian spirituality, leadership, acceptance and love. Paz, part-time staff and volunteers work with a consistent group of 15 teenagers, though the number can rise to 25, including 10 females. Fees range from $5 for a class to $15 for a month. The message of fitness and health is one the 701 needs to hear, Jesse says. Gyms aren’t affordable or available, but fast food is. “People in low-income neighborhoods battle obesity,” he says.

MMA’s popularity brings teens in. “They can see it on TV and here it is at a reasonable price,” Jesse says. Once inside, they see more than a gym. “I’ve seen whole families give their lives to Jesus,” he says. “701 United is a place where lives are transformed.” 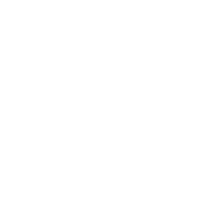 About social enterprise at cctfresno.org

For Tree of Life, the benefit has been connections. Bryan Feil (BA ’07), CEO of Lanna Coffee, and Jake Soberal, co-founder and co-CEO of Bitwise Industries, were judges. Today Lanna is the café’s only coffee, and the location near Bitwise is no accident. “We’ve gotten nothing but support from the people we’ve met, and we hope to help them as well,” Carolyn Ocheltree says.

Eddie Valero, who helped judge Spark Tank in 2016, was moved to think more about how YMI could generate income rather than depending on grants, donations and public funding. “I will always hold Spark Tank dear,” he says.

Spark Tank motivated 701 United to be strategic and organized. “With the support we were able to build a concrete ministry in the neighborhood,” Jesse Paz says. Spark tank helped get the word out to students and donors. “It’s been a blessing,” he says.

A path out of rehab, toward manhood or into physical and spiritual fitness—whatever a social enterprise looks like, whatever it offers customers, it’s a way forward for those who need help and those who want to help them.

It’s not easy running a business—attracting customers, developing employees and keeping up with laws and regulations can make anyone who wants to be their own boss feel like they’re working for everyone but themselves.

Social enterprise puts a different spin on these concerns: