Getting God on Video 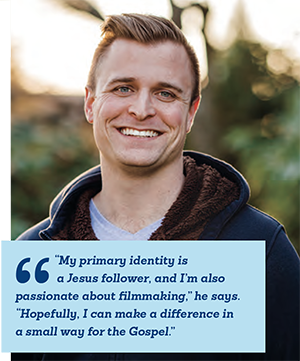 Riley Endicott (BA ’14) has traveled the world putting the work of God on video. Filmmaking with a Christian mission has led him to Lebanon, Guinea-Bissau in Africa, and most recently the Democratic Republic of the Congo. His focus: producing short documentaries about faith- based projects bringing hope and help to people in need of both.

“These videos are my way to live out a Christian’s mission to build the kingdom of God,” Endicott says. “Getting these opportunities to use my tools and talents excites me.” Fresno Pacific University gave Endicott a deep knowledge of scripture as a biblical studies major. “I learned the kingdom of God is present now, and our mission is to spread the gospel and make disciples,” he says. A communications minor allowed him to build skills as a budding filmmaker. Combining these two fields of study is powerful, he says: “A documentary can change a person’s world view and help them to better love their neighbors.”

Endicott, 28, moved from Fresno to Tacoma, WA, in 2017. He works as video producer for Life Center, a church in Tacoma, and he also runs his own business, Riley Endicott Films. Last year in the Congo, Endicott filmed efforts to build a badly-needed medical clinic. Fredy Tshibanda—who’s from the Congo and now lives in Fresno—is leading the clinic project through his nonprofit, United for the Future. Locally, his organization works to provide mentors for students in the Fresno Unified School District.

People in the Congo don’t have access to medical care, and one out of seven children dies before age 5, Tshibanda says. He needs $200,000 to build the clinic and earlier this year had collected about $63,000, an accomplishment he credits to Endicott’s film. “Riley was so gracious to leave his current engagements at the last minute and take a difficult mission trip to the Congo in order to convey so eloquently a message of sharing hope. Many people responded to support the construction of the clinic to save the lives of people that God loves and wants to use,” Tshibanda says. Traveling to the Congo led Endicott far beyond his comfort zone. “I got sick at one point, but I see the value of telling these stories, and I’m willing to take the risk and answer that call,” he says.

In previous travels, Endicott filmed videos in Lebanon about Youth for Christ and the Syrian refugee crisis. In Guinea-Bissau, he produced a film about West African Vocational Schools, a Christian nonprofit based in Fresno.

Endicott hopes to continue making mission- oriented films. “My primary identity is a Jesus follower, and I’m also passionate about filmmaking,” he says. “Hopefully, I can make a difference in a small way for the Gospel.”