Alex Wilson (BA ’15) hated church growing up. Seeing God as distant, he thought he’d never make it into Heaven. This realization that traditional church doesn’t work for everyone led him to take the message of salvation to where young people spend their time: the internet.

The son of Angulus Wilson (BA ’89), former FPU university pastor and chief diversity officer, Alex says the childhood time he spent at Billy Graham crusades when his father worked for Graham still affects his view of ministry. Alex likes to think of himself as the digital version of the iconic evangelist. 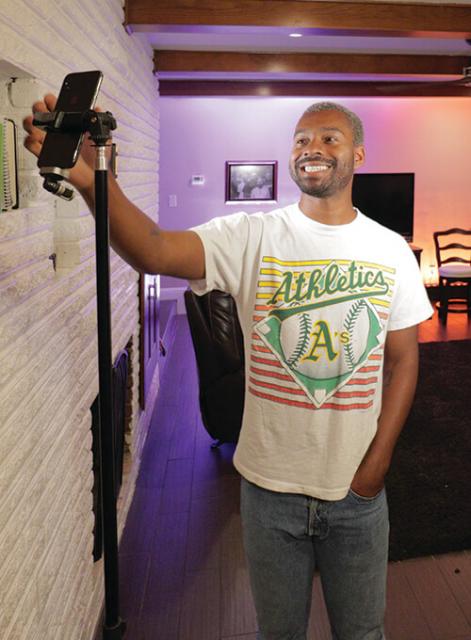 Wilson didn’t grow up with a desire to follow in his father’s footsteps, but a major heart shift led the psychology graduate to youth ministry. At a large Fresno church, he struggled with how disconnected the kids in his youth group were.

“I’d spend all week getting ready for one hour of ministry, and the kids would spend that whole time on their phones,” he says. To meet them where they are, Wilson started #10secondsermons, brief messages designed to minister to kids while they scrolled through social media.

Alex and his wife, Lokelani, knew they wanted to minister in Hawaii. At a church on the island of Kauai, he found himself experiencing the same frustrations he’d had in Fresno, and felt called to reach unchurched youth through videos. In 2018, he resigned from his youth pastor position to focus on this new venture, @instachurchlive.

Every Sunday at 8:08 a.m. Hawaiian time, the Wilsons stream a live 20 to 30-minute church service from their home. With Alex on guitar, they follow a worship song with a sermon. Their three young boys sometimes wander in and out. During the week, Alex and Lokelani produce short videos to give people with busy schedules time with the Lord. They have amassed over 800,000 followers on TikTok and more than 27,000 on Instagram.

“We have so many followers and we know we’re close to something big,” Wilson says. “God has shown me that we’re doing what we’re supposed to be doing.”

Traditional missionaries get financial support from churches, but Wilson says he’s never been invited to share or fundraise at a traditional church, and has had pastors tell him what he’s doing isn’t biblical because it doesn’t encourage a sense of community.

On the other hand, Valerie Rempel, Ph.D., vice president and dean of Fresno Pacific Biblical Seminary, called Wilson part of a “sea change” for the church in creating online connections. “Older generations are still struggling with that reality. He’s witnessing in the digital world,” she says. “It is so in keeping with the evangelical tradition, especially the more conservative and Pentecostal streams which have routinely been among the first to embrace technology as a means of mission.”

For his part, Wilson says he encourages followers to plug in to a local church. For those who haven’t, @instachurchlive is filling a void. More about Wilson at alexdionwilson.com.